Demostrations on the Labor day 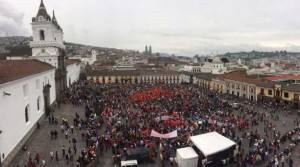 Today, at 10:30 representatives of social, trade union and indigenous groups marched to the Plaza de San Francisco, in Quito. Retirees and teachers have joined this demonstration on the occasion of the Labor Day. Different organizations such as Popular Front, the Confederation of Indigenous Nationalities of Ecuador (CONAIE), the United Workers Front (FUT), the General Union of Workers of Ecuador (UGTE), among others, have gathered to protest against the new Law for Labor Justice, because according Edgar Sarango, president of FUT, “workers’ rights are being violated.”

The government also organized a countermarch, “Let’s see if everyone is against us (…) They will not be able to begin because we will easily beat them eight-one,” were the words of President Rafael Correa days earlier during a press conference.

Retirees will also be able to accumulate the annual bonuses