Deposits in the financial system increased by 2.5% in June 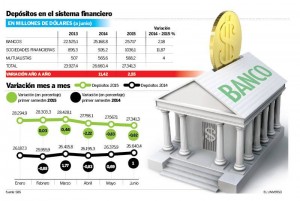 Deposits in the financial system recorded a lower growth rate in the first half of 2015, according to data from the Superintendency of Banks (SB). As this occurs, some institutions seek to encourage savings through promotions and sweepstakes.

The slower rate of growth of deposits is, according to Jaime Carrera, executive secretary of the Fiscal Policy Observatory, that less dollars are coming into the economy by low oil prices and a modest foreign investment.

According to René Cordero, manager of Mutualista Pichincha, by macroeconomic contraction, 2015 shows a reduction of liquidity in the economy, which is reflected in the financial institutions that must compete for resources from customers.

In the case of the mutual company, explained Cordero, in recent weeks, rates of some products increased to attract customers.

Javier Castillo, national marketing manager for Banco del Pacifico, said that since last March they have a promotion that has been positive. Thus for every $ 100 deposit customers participate in prize drawings, from piggy banks to toasters. In addition, also they also get a ticket for a greater draw of a car and a house.

Castillo reported that the savings culture is always encouraged by the bank.

He also clarified that current promotions, that will be expanded from August to November this year are not only by the current situation, but were part of a plan of the bank.

When asked if they felt a variation in deposits, he explained that in regard to natural people, the amounts have remained, but there has been a decline in companies´ deposits.

Fabian Mora, vice president of Marketing of the Pichincha Bank, explained that his organization has created the promotion “I Save For,” by which $ 585,000 in cash to have been awarded to 60 clients who increased their balances by $ 150.

At this time 200,000 accounts were opened, the official said, remarking that 433 592 customers participated.

He also explained that the fixed-term savings are encouraged with prizes such as tablets, LED TVs and induction cookers.