Doctors awaiting decision on their resignations 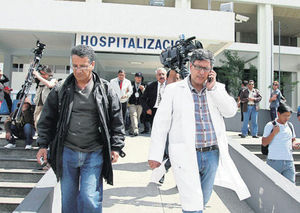 In the Pablo Arturo Suarez Hospital in Quito, where the first protests against the new Criminal Code were originated, yesterday, it emerged the concern about what will happen to the resignations presented by the doctors.

This, after the agreement reached between the government and doctors on the third paragraph of Article 146 of the normative.

About 90 hospital doctors have submitted their resignations, as confirmed two weeks ago by his representative, Juan Barriga. He was the first doctor to deliver the letter of resignation to the Pablo Arturo hospital as well as to the leadership of the trauma unit.

Next Tuesday will conclude the 15-day deadline that the authority set to decide whether or not to accept the resignations, the doctors explained.

For them the agreement with the government is clear, so they expect that resignations are not admitted through a reply from the hospital establishing its official position.

Baby was rescued from rubbles

Government keeps defending its position on the COIP