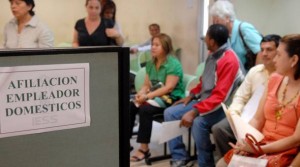 The Association of Payed Home Workers requests that in the Labor Code, currently under discussion in the National Assembly, are added the dispositions approved on the ILO (International Labour Organization) Convention 189, in 2013.

The Convention 189 refers to the freedom of association, the elimination of all forms of forced employment, written contracts specifying working hours and all the duties that workers have to perform, among other details.

The Guild has sent letters to the Minister for Employment Relations Carlos Marx Carrasco to attend to these requests.

“Being included in general form in the Code as any other worker is an achievement, but if the rules of the Convention 189 on Domestic Work ratified in September 2013 are not added, the struggle for the rights of Payed Home Workers will stay unfinished, “said Maximina Salazar, spokeswoman of the Association.

Superintendence of Public Services is proposed in Water Law