Drivers are still circulating in Metroway rail despite sanctions 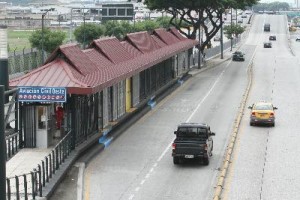 Since yesterday became effective the fine of the Guayaquil City Hall for invading the exclusive rail of the transport system Metrovía (Metroway); however, there were many drivers who ignored the rule.

In addition to that, control operations were not reported in the city yesterday to sanction those who committed the violation.

The council noted that the lack of operations will not decrease the rate of sanctions, as these will be further supported on the eight hundred cameras of the Corporation for Public Safety of Guayaquil (CSCG).

Violators of the law photographed by these equipments will receive a picture of the offense and information on their fine to their emails, which in case of recidivist drivers will be of $ 708 and for first time $ 354.

Municipal Transit Authority (ATM) indicated that the only vehicles that can run on the 92 km delimited area for Metroway system will be ambulances and other emergency vehicles that are operational.

In addition to paying the penalty provided by the Municipality, drivers shall also pay the $ 35.40, stipulated by the Traffic Act, the Transit Commission of Ecuador (CTE) has charged so far.