“Inmediate cease fire” in Ukraine is requested by Poroshenko, Hollande and Merkel 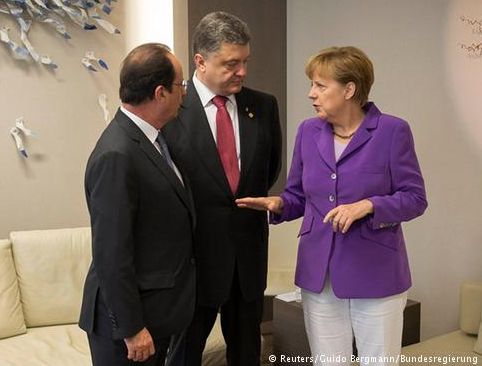 French President François Hollande, German Chancellor Angela Merkel and the head of state of Ukraine Petro Poroshenko appealed this Sunday to set an “immediate ceasefire” in the east of the country, reported the Elysee.

In a telephone interview, the three leaders “took stock of the situation in Ukraine and regretted the failure of talks on Saturday in Minsk. They called for an immediate cease fire,” reported the French presidency.

Contacts in the capital of Belarus failed this weekend, without achieving the conflict distension, which has caused more than 5,000 deaths since April.

This Sunday the clashes intensified in eastern Ukraine, where Kiev tries to keep control of the town of Debaltseve, a strategic point that would allow separatist rebels to connect the republics of Donetsk and Lugansk.

At least 17 civilians were killed, according to reports of this Sunday from Kiev and the rebels, while the army of Ukraine reported during the day that 13 soldiers were killed and 20 were wounded.