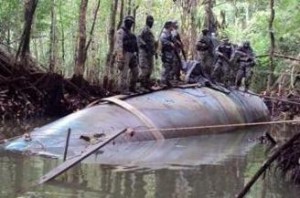 More than seven tons of drugs were discovered by the Colombian army in a submarine that was near the border with Ecuador. The discovery was made last Wednesday, when the vessel of 18 meters long and 3 meters wide tried to make a journey to the rural area of Tumaco into the province of Nariño that is 605 km to the southeast of Bogota, Colombia.

The Admiral Hernando Wills, commander of the naval force of the Pacific, discovered the ship. However, Admiral Wills informed that the submarine did not have a propeller. It is believed that the submarine would have been carrying cocaine for Central America and United States.

Such submarines cost around 800 thousand dollars; this is the second vessel discovered during the year. In 2010, four drug dealers’ submarines were found. Admiral Wills added that the submarine did not have the necessary equipment to fully submerge.