Carnival Fever Is All Around The World 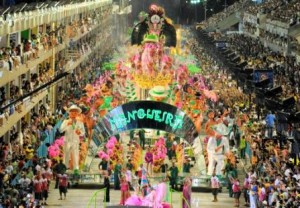 Carnival is celebrated in many countries of the world. In Brazil, Rio de Janeiro, people are putting the finishing touches on the floats and garotas are adding more feathers to their costumes while samba schools are getting prepared to fill the streets with rhythm on the parade to be held in the Sambadrome this weekend.

In Colonia, Germany, citizens began to dress up since yesterday due to the celebration of Thursday of carnival, which is celebrated on lent’s eve.

Carnival fever also reached Ardez, Switzerland, where several people rang their bells and sang in the streets in the Engadin valley, during the celebration of Chalandamarz.

In New Orleans, Mardi Gras is among the largest and most famous in the world. The festival began on January 6, the night of Epiphany, since then floats, masked balls and the famous king cake are spreading joy all over the place. The most colorful parades are held during the last five days of the carnival.

In Venice, masks are the most important element of the carnival. The costumes are characteristic of 1750’s and the maschera nobile, a white mask with black silk robe and a hat with three points is an icon of the celebration.