Earthquake Ecuador: Was Ecuador prepared to face an earthquake? 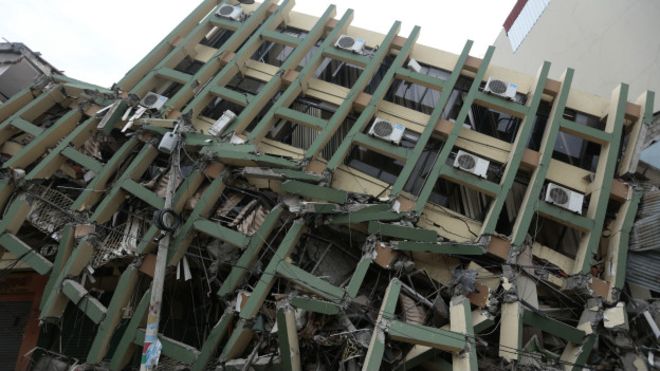 The 7.8 magnitude earthquake that occurred Saturday in the Ecuadorian coast took by surprise a country that in recent months distrusted more its active volcanoes than the depths of the earth.

“We knew something like this could happen at any time, earthquakes had occurred in this are before, but most people had no idea what to do because this is rare,” says Alexandra Alvarado, head of Seismological branch of the Institute of Geophysics of the National Polytechnic School of Ecuador.

The expert adds that Ecuador can not be compared with countries like Chile or Japan, where -due to the high rate of earthquakes- constant trainings are conducted to prepare the inhabitants of the areas at risk.
“People is trained here every 5 or 8 years but then, the people forget. The last earthquake that hit the region was further north in 1979. Hopefully the situation will change and we learn that this can happen,” told Alvarado to BBC World.
The Geophysics Institute has recorded so far more than 160 aftershocks but the seismographic activity has been declining with the passing of the hours.
The latest report from the authorities reports on at least 413 dead.
In contrast to Ecuador, two earthquakes recorded on the Japanese island of Kyushu on Thursday and Saturday -the latter of a 7,3M- caused 43 deaths. There are at least 11 missing.
Destruction
In addition to the human toll, the earthquake left bridges, roads and buildings destroyed.
For Alvarado, the earthquake is putting on trial the construction quality of a country: “In this case, some structures endured, others did not.”

Enrique Garcia, an expert in seismology and earthquake resistant structures, said that one of the problems Ecuador faces is the lack of buildings that comply with the rules established to face such situations.

Ecuador’s earthquake in pictures
“What is sought concerning construction is not to prevent a building from being damaged, but not to collapse, but that not only happened in the disaster area, but also to a bridge in Guayaquil, where the waves of the earthquake arrived _ attenuated,” Garcia told to BBC, adding:
“Municipalities do not enforce that buildings have the right materials, in any city in Ecuador there is a control during construction.”
The engineer explained that in Quito there are bodies that control previous studies of future buildings but this is not a guarantee, since during construction, no one can assure compliance with the plans. But in other cities that control does not even exist.
“I have had to oversee many projects and see that there are serious deficiencies, not by all companies, but there are some that do not do the right thing because of cutting costs and others that do not even know of these standards.”
For Garcia this can not happen in a country that is crossed of geological faults which have caused several earthquakes throughout its history.