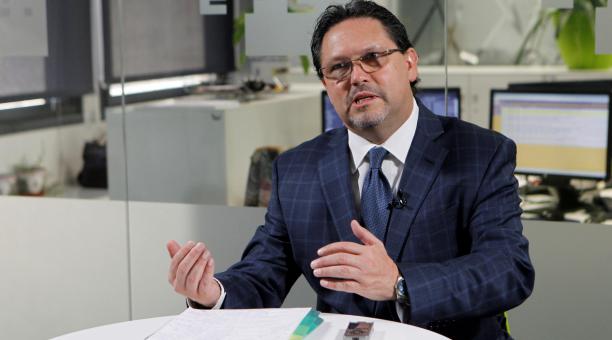 The Ecuadorian Minister of Tourism, Enrique Ponce de León, said on January 19, 2018  that there is “a lot of interest” in which the major Spanish hotel brands are established in Ecuador after its great success in Caribbean tourist destinations. “Europe has to have more presence (tourist) in Ecuador and the door of Europe is called Spain,” emphasized the Secretary of State in an interview with EFE in Madrid on the occasion of the International Tourism Fair (Fitur).

“The Ecuadorian market is the world, but we have to go step by step,” said Ponce de León, “we are very clear that the European market is very important”. In Ecuador are present the important American hotel chains and some European, but not Spain, he said, despite all the tourist possibilities of the country, as their “four worlds” natural. “Visiting Ecuador, we do not have to go to America,” said Ponce de León, who recalled that the president of the Republic, Lenin Moreno, has clearly proposed that it be a tourism power as the main source of income.

“With conviction, work, intelligence, professionalism and good advice we will get it,” said the minister. The objective is very ambitious: “one by one”, that is, a foreign tourist for each inhabitant. “If we want to call ourselves a true tourist power, we have to go towards it. It is a path that many would say in the long term, I hope it is medium,” he said.

Ecuador (16.2 million inhabitants) received 1.6 million foreigners in 2017 most of them Americans 14% more than in 2016. Tourism is currently 5.2% of GDP, the third largest source of income no oil tankers For this jump public resources and private investment will be needed, he admitted: “That is another great change, today we are co-managing between the Government, the public and private companies”, with an articulated team to become a power.

According to Ponce de León, Ecuador is “prepared” in airport, land and maritime infrastructures, since previous governments invested millionaire resources in public works.

On his third visit to Spain as Minister of Tourism, Ponce de León noted that the illusions of a first moment have been turned into projects, and these into “realities”.

Last June he met with Spanish businessmen to talk about investments and promotion and commercialization of the Ecuadorian offer in Spain and, through Spain in Europe. There are already, he said, “many very advanced investment projects for very high amounts” in tourism and other sectors.

He mentioned that a “very important” agreement has been reached with the Globalia group. “We are working hand in hand with those who know the Ecuadorian market and those who know Europe,” he summarized. He added that “immediate” attention is also being paid to the Latin American market. And with other Andean governments, agreements are reached or sought with a view to a “regional tourism” coming from these same countries and the rest of the world.

He reiterated that Ecuador is a country of “open skies”, since air connectivity is fundamental for tourism. “Curious things, We are closer to Madrid than to Buenos Aires!”, He emphasized to highlight the huge number of flights between Spain and Ecuador. To achieve the “one by one”, Ecuador also makes an “intelligent promotion” with the main digital tourism platforms in the Latin American, European and North American markets, also betting on Asia. In addition, the resources of diplomatic, consular and commercial offices are taken advantage of, always with the idea that all Ecuadorians, inside and outside, are “promoters of tourism”, explained Ponce de León.

However, such tourism development can have negative environmental and social consequences, so the Ministries of Environment and Tourism work together to guarantee the sustainability of each destination.

“Not to fulfill statistics (of objectives) we are going to put at risk our living scenario, which is the true added value that we can offer to tourists,” he said. He also acknowledged that Ecuador has “much to learn from Spain”, the second most visited country in the world.

But learn from others not only the positive, but also the negative experiences to avoid “dying for success,” he said. Ponce de León will meet these days with hoteliers in Madrid, with the Secretary General of the World Tourism Organization (OMT), gastronomic entities and the Spanish Organization of People with Disabilities (ONCE), as Ecuador is a pioneer and innovator in tourism inclusive and accessible. (I)