Ecuador negotiates trade agreements with the EU in Brussels 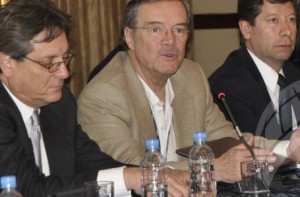 The government triad composed by Francisco Rivadeneira, Minister of Foreign Trade; Ramiro Gonzalez, Minister of Industry; and Javier Ponce, Minister of Agriculture and livestock, traveled to Brussels in order to refine details prior to the third round of negotiations between Ecuador and the European Union (EU) to specify a multiparty trade agreement.

The pending topics to specify after the second round of dialogue are linked to access, government procurement, intellectual property, among others, which will be the centerpiece of the meeting with the EU.

The coordinator Minister of Production, Richard Espinosa, informed that the team will also seek to set the date for the third round and the obtaining of a mechanism whereby Ecuador would continue to benefit from the tariff preferences next year, if the agreement does not materialize in 2014.

Regarding this issue, Mauro Mariani, Political Chief of the EU in Ecuador, said that given the lack of a legal instrument to extend tariff preferences, it is not excluded that a temporary one can be create in these months.

Draft of new Labour Code will be presented on May 1