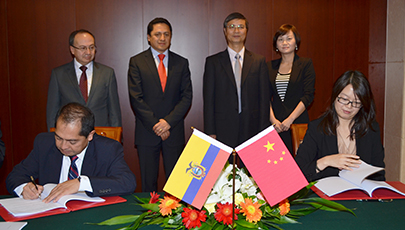 Ecuador will receive $ 509 million from China as a financing for the Coca Codo Sinclair hydroelectric. This was expected with the journey made by the Minister of Strategic Sectors, Rafael Poveda, to that country on Tuesday, October 28.

The financial institution Eximbank of China granted a loan for the transmission system of electricity produced by the plant, with capacity of up to 1,500 megawatts of power.

The work, which will be operational in January 2016, has an estimated cost of 602 million. So it is covered almost entirely by Chinese money, according to statements gathered by EFE.

The Vice President of the bank, Yuan Xingyong, expressed his satisfaction by Ecuador’s confidence on his entity.

Agreement for the supply of gas between Russia, Ukraine and the EU