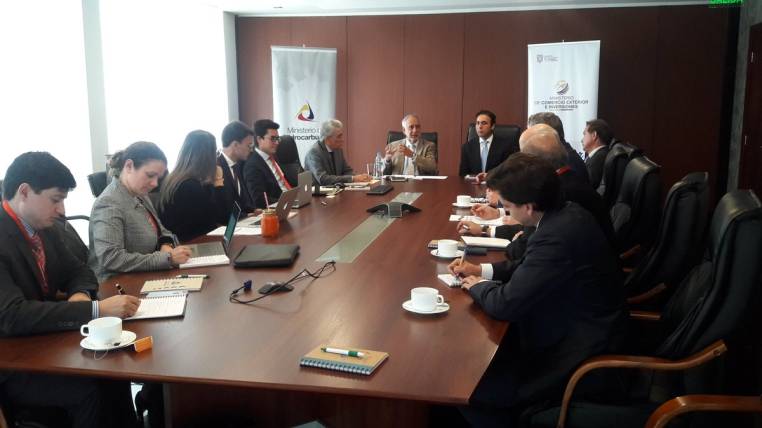 The Ministers of Commerce and Hydrocarbons, Pablo Campana and Carlos Perez, respectively, presented this Wednesday, April 4, investment possibilities before representatives of Canadian firms.

This was reported by those state portfolios in their Twitter accounts, in which they indicated that Canadian companies have shown interest in investing in the country in the hydrocarbons sector.

“During the day of this Wednesday, we will hold meetings with representatives of Canadian companies, which have an interest in projects in the hydrocarbon sector. New oil rounds are planned for this year, “Pérez wrote in his profile of that social network.

The Ministry of Hydrocarbons indicated that the meeting is part of the policies implemented by the Government led by Lenin Moreno, “to promote new investments in the sector, through joint work with private companies.”

He explained that as part of the Canadian delegation of investors visiting Ecuador attends the president of the “Canadian Council for the Americas”, Kenneth Frankel.

“The purpose of this approach is to show Canadian investors the projects of the hydrocarbon sector that seek to be enhanced through foreign private capital, to contribute to the economic development of the country,” said the Ministry of Hydrocarbons.

At the meeting, which took place at the headquarters of the Ministry of Hydrocarbons in Quito, the manager of the public company Petroamazonas, Alex Galárraga, explained to the representatives of Canadian companies the investment projects of the state oil company, including the launch of the Oil & Gas fields.

“We look for investment for the Amistad Field, which is part of the Oil & Gas fields, to enhance it and achieve greater production of natural gas,” said Galárraga.

Last Wednesday, the Government of Ecuador presented its investment plans in the energy, mining and industrial areas, which amount to about 14,000 million dollars, during a forum that brought together companies and financiers from twelve countries around the world.

Two hydroelectric plants and one plant to process aluminum are part of the catalog of investments that the Government of Ecuador presented to representatives of some fifty companies and financing banks.

The forum “Invest Ecuador 2018” presented a total of twelve investment projects but, above all, showed the country as a territory “of opportunities to invest”, reported the Ministry of Foreign Trade, organizer of the event.

The government is seeking that projects be awarded within a maximum period of five months under a transparent negotiation process that benefits the country and those foreign companies that want to invest in Ecuador, the ministry said.

The holder of the portfolio of Commerce, Pablo Campana, emphasized in that quote that “Ecuador is a country that has everything, infrastructure, natural resources, human talent and many opportunities.”

“There is a lot to develop,” Campana said during the forum that brought together representatives of companies from Ecuador, China, Japan, the United States, Canada, Switzerland, Spain, Australia, Russia, Chile, the United Kingdom and Germany. (I)