Ecuador will study its continuity in the CAN 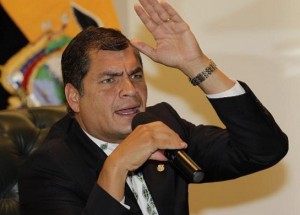 President Rafael Correa said yesterday that the continuity of the country in the Andean Community (CAN for its Spanish acronym) should be “seriously examined.” These statements were given after the CAN issued last week a contrary resolution to the trade protection measures taken by the country, which affect Colombia and Peru.

In addition, the Ecuadorian government on Sunday challenged a decision of the CAN, which required it to remove the safeguard to imports from Colombia and Peru.

Ecuador rejected the resolution stating that it believes that it “exceeds the powers conferred upon the Cartagena Agreement.”

After that, Correa at a appointment with journalists of Guayaquil indicated that it might be appropriate to discuss the continuity in the body, which according to the president, “it is useful for very little.” He further clarified that his position was not due to “this cojuncture.”