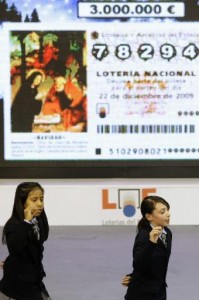 On December 22 of 2009, the Ecuadorian Yajaira Gonzaga Pineda became the image for the Spanish Communications media. At 11:38 her voice announced a storm of Euros. The big prize of the Christmas lottery, her older sister, Eliana starred on the same scene on 2005.

In five years the Gonzaga relatives have delivered over 1,082´300,000 Euros. This total was obtained after multiplying three million for each one of the sold series with the winning number. On 2006, Bryan Lafebre sang the magic number of 20,297, which was unloaded in the city of Soria.

This way Ecuador gives a fortune in Spain, on the next days the country would be paralyzed while waiting for the new rain of million. This Quantity would help on these times of crisis, since the rate of unemployed grows rapidly.

Sixteen of the thirty-six children from the San Ildefonso house would enrich many Spanish on this year. Ten of those children are of Ecuadorian nationality, while Yajaira Gonzaga would reprise her role as well as her brother Miguel, but the youngest of the siblings, Guillermo will make his debut, and the drums of fortune await them.

Assange Writes his Memoirs About Wikileaks