Vanguardia Magazine Would Obtain Information from Their Hard Drives 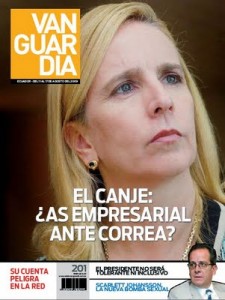 The first Criminal Judge of Guayas, Angel Rubio, failed yesterday partially in favor on the Vanguardia magazine case, regarding its request for precautionary measures.

On Friday, the written media was cleared off from its offices, after the submission of the trusteeship “AGD-CFN No más impunidad,” which seized the building because of an alleged debt that keeps the magazine with the lease of the property. In the operation were also retained the computers from the magazinne.

In his verdict, Rubio states: “As the Constitutional duty of the Judicial Officer is to ensure the constitutional right of press to inform and the public has the right to be informed, I order to receiver, Paul Arellano Andres Cabezas, immediately let (…) (Vanguardia Magazine) get a copy of the hard drive of each computer.”

The action will be realized in front of a public notary and specialists in computer systems. The hour would be defined later.

Judge Rubio did not announce the returning of equipment, because it still remain under the trusteeship; the coercive process is still in force against the magazine.

Juan Carlos Calderón, Vanguardia’s editor in chief, insists in the request of an expertise to assure the non entry of anyone to the computers system after the last Friday seizure.

Vanguardia Magazine Could Not Support Their Information