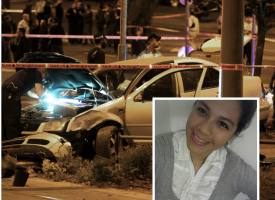 The Ecuadorian Karem Mosquera, 22 years old, who died for the severity of injuries sustained during a terrorist attack reported on Wednesday October 22 in Jerusalem, was buried in the Israeli city by express consent of her family.

Mosquera, who was born in Guayaquil, struggled between life and death since last Wednesday, after being hit by a vehicle, which according to the main research carried out by the Israeli police, it was a premeditated act.

Her mother Rosa Barrera and her sister Priscilla Mosquera Barrera,  arrived on Saturday, October 25th to Jerusalem and took part in the funeral which was attended by a delegation from the Ecuadorian Embassy in Israel, led by Ambassador Guillermo Bassante.

Mosquera was in the Middle East getting ready to make her conversion to Judaism from a year ago. She was studying the Hebrew language.

Her father Guido Mosquera,  said on Friday that his daughter, who was also working, began the process to obtain Israeli citizenship and start studying Archaeology.