Around 04:00 (Ecuador time) on Wednesday, February 19, 2020, Marcelo Toalombo left his residence in Wuhan , epidemiological center of the new strain called Covid-19. According to the authorities of the Asian giant, there are already more than 2,000 deaths. 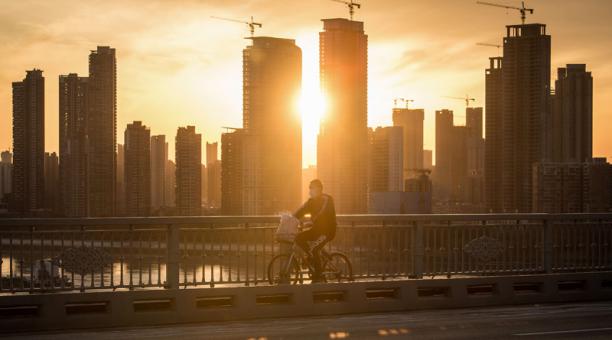 Geovanny Toalombo , Marcelo’s brother, reiterated feeling very happy to know that his relative left that area. “We are happy because my brother and other countrymen left the focus of virus infection .”

On February 3, Marcelo Toalombo recorded a video from his place of residence in Wuhan, where he had to remain for the emergency, to ask for help from the Government of Ecuador , for his return to the country.

This Wednesday 19, Geovanny assured this newspaper that the flight from the Chinese town has already taken off for Ukraine . It will be about seven hours of flight. He said that prior to this his brother and four other Ecuadorians underwent medical checkups and disinfection of his luggage . “Everyone is healthy and they were able to board the plane.”

They still have no details of how the quarantine process will be for compatriots . However, it is known that they will use several analyzes to rule out any contagion . “They will remain at least 14 days under observation.”

Despite this, this family is calm , because they know that they will soon be able to see Marcelo, who was in his third year of PhD at a Chinese university.

On Monday, February 17, President Lenin Moreno announced the return plan for five Ecuadorian students who decided to leave Wuhan . They will do it on a Ukrainian plane . In total nine were registered; including a young woman of dual nationality who left before. Currently three Ecuadorians stayed in Wuhan, central Chinese province of Hubei.

The operation has been coordinated between the Presidency, the Foreign Ministry, the Embassy of Ecuador in Beijing and Chinese and Ukrainian officials. So far they consider it successful.

“Our nationals traveled with a group of Ukrainian , Dominican, and Panamanian citizens. Prior to their trip, Ecuadorian citizens were transported in a special bus, rented by the Embassy of Ecuador in Beijing, to a site specially designated to comply with the migration and health protocols and procedures provided by the competent authorities, ”explained the Foreign Ministry, it’s a statement.

And it was complemented that “there (the compatriots) were strictly evaluated and it was confirmed that they are in good health.”

Upon arriving in Ukraine they will be received by local medical teams . The Ministry of Foreign Affairs has deployed diplomatic and consular personnel to accompany and monitor the health process.

After that, additional health measures will be complied with, which will be verified in application of the complementary deadlines and protocols of the World Health Organization (WHO) and the Ecuadorian State.

On the subject, Moreno sent a tweet in which he highlighted the actions they took to make effective the return of Ecuadorians.