Ecuador’s banana sector, worried about effective date of the agreement with the EU 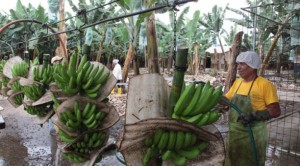 The eleventh edition of the International Forum of Bananas concluded with the news that the guild would close the current year exporting 290 million boxes and would break the record of exports it reached in 2011; during the last lecture Genaro Baldeon, Deputy Minister of Foreign Trade, gave atnoon on October 16, the businessmen expressed uncertainty about the year when the trade agreement with the European Union would take effect.

Eduardo Ledesma, President of the Association of Banana Exporters (Aebe), said that the union is concerned because “yesterday the ambassador of Ecuador in Germany (Jorge Jurado), has announced at an event organized by Pro Ecuador, that the agreement will take effect in 2017, and has said it in a conference where the business mecca is present.”

If this announcement is true, he added, “in 2017 we will no longer pay 54 cents of difference compared with our competition, but about 64 cents.”

Nigeria is declared an Ebola virus free country by WHO