Eight teams are getting ready for their penultimate challenge 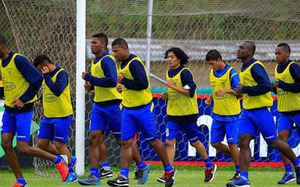 Ecuadorian team trains for its match against Uruguay

While Ecuador chose his prospective lead players to face Uruguay, the other six selections (Venezuela rests) getting their rosters ready to play tomorrow, some for the classification and others for the honor.

The Tri will go with Dominguez in the goal area; Ayovi, Guagua, Erazo and Paredes in the defense; Valencia, Montero, Castillo and Noboa, in the mid field, and in the strike line would be Caicedo accompanied, but not confirmed, by Jaime Ayovi.

Thus, Ecuador-Uruguay is probably the biggest challenge, since both must win to qualify directly, while if they lose, their chances go to a phase of pass-off against Jordan, although the possibility of taking a cross of income is not ruled out.

Argentina, which is already classified, greets Peru, which is disqualified; Venezuela, hoping to win and expect results to aspire to the playoffs; Paraguay awaits being disqualified; Colombia and Chile will play in Barranquilla for the option of being the second in the classification, since both are nearly qualidified, except if a “catastrophe” happens.

On Tuesday 15, will be played the last date, with these clashes: Chile – Ecuador, in Santiago; Uruguay – Argentina; Paraguay – Colombia; and Peru – Bolivia.