BREAKING NEWS
Ecuador will present at the UN advances in Sustainable Development Goals
These are the benefits of eating bananas on an empty stomach
With only 9% occupancy, hotels already consider lost in 2020 and 2021
Filmmaker Sebastian Cordero: “The Academy has given a sign of inclusion”
Agrocalidad rules out presence of locust plague in the country
Four axes of business opportunities were highlighted in dialogue on the Reinventa Ecuador project
The US withdrew 300 visas from Ecuadorians linked to corruption
Movie theaters will reopen on July 6 in Ecuador
Ñanda Mañachi has been rescuing Andean music for decades
Petroecuador awarded spot sale of Phillips 66 Company crude

Nebot confirms his candidacy for reelection 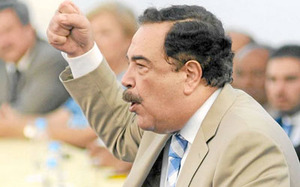 During the solemn meeting of October 9, conducted by the Municipality in commemoration of the anniversary of the independence of Guayaquil, was the venue of choice for the mayor, Jaime Nebot (PSC- MG), to inform his candidature for the re-election in the elections of 2014.

To the citizens that attended the Integration Square, Nebot rectified that, although he had decided to “retire,” he chose not to do it, and accept the candidature, fearing that the regime would “change what works for that that does not work,” referring to the port of Guayaquil.

While regime leader, Rafael Correa, of the Alianza PAIS movement (AP) only mentioned that they “will be defeated by the beauty, and rush of the youth of the women of Guayaquil” after his words, an image of him with Viviana Bonilla was projected.

In his speech, Nebot said he hoped to end his third term expecting to see a government that shows greatness, moderation, civility, professionalism and respect for the city. However, they are just the opposite.

The mayor of the coastal metropolis said there are new dreams and challenges that “in Guayaquil everyone eats bread, and no one ever has to eat shit, not even the fans to it.” His words made allusion to a phrase made ​​by the President of the National Assembly, Gabriela Rivadeneira who said that “the poor eat bread and the rich eat shit.”

Nebot ended up talking a bit about his vision for the coming years, the plan he called a “super Guayaquil,” which will feature the Daular airport, expanding the Metrovia, the airbus, macrovias, and free Internet. “To carry out these dreams we are not going to raise more taxes, more so, next year, not only we will not raise property taxes, but, for the first time in history, we’ll lower them.”