El Telégrafo EP aims to reverse its losses into revenues 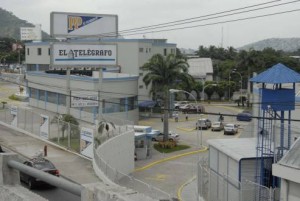 Unlike the recent years that marked Editogran, the growing Public Company El Telégrafo EP aspires from this 2015 to become “self-sustaining.”

The goal consists in the planning for the period 2015-2017 of Editogran SA, in liquidation process, according to its general manager, Santiago León. “For 2015 the company is going to be completely self-sustaining and with a good percentage of growth,” he said, and explained some background.

The company Editogran SA, whose majority shareholder is the state, printed the newspapers El Telégrafo and PP El Verdadero since four years and a half, when it was created. However, the government established its dissolution and the creation of the Public Company El Telégrafo EP, through the Decree 545, issued on Wednesday 14 January.

61 bodies were found in abandoned crematorium in Acapulco