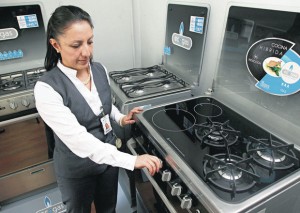 Induction cookers are currently sold with discounts of between 12 and 20%. This, after the announcement of the exemption of the VAT and the foreign exchange outflow tax.

On the other hand, gas cookers have presented an increase of up to 64% because of the ICE increase.

In Artefacta store, a Indurama four-burner stove with oven costs $ 559, the same that last year had a cost of $340.

Meanwhile, in Créditos Económicos store, the interest on induction cookers has increased with the announcement that gas stoves charge the 100% of Special Consumption Tax (ICE for its Spanish acronym) and induction cookers are exempt from VAT, noted Sonia Villacis, from the Marketing Department.

“Sales of gas cookers have falling since the announcement was made, but we expect that grow because the people have been waiting to make a decision on prices, the cost is very influential in the market and the fact that the induction cookers do not pay VAT is an advantage,” said Villacis.

El Telégrafo EP aims to reverse its losses into revenues