Electronic money will be tested on 8 cooperatives 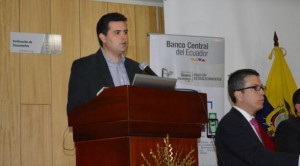 Eight cooperatives will participate in a pilot scheme to test the electronic money sistem. To do this, the representatives of these entities and the Central Bank of Ecuador (BCE for its Spanish acronym) have signed an agreement the morning of September 30.

The electronic money, which will be operational at the end of 2014, will be a means of payment that will use cell phones to purchase goods in establishments such as carservices, pharmacies, supermarkets, etc.

The pilot plan shall be made between late October and mid November and will serve to correct or improve the system, said Fausto Valencia, head of electronic cash system of the BCE.