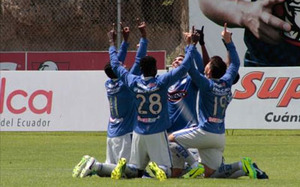 With the tie of 2 goals, the leader of the national championship maintains 6 points of difference with their escorts, Independiente and Universidad Catolicay and in the penultimate round, played on Wednesday, when they will measure Liga de Loja (at 19:30) in the Capwell stadium, if they win, they would become unreachable, which would be the 2013 national champion.

Emelec, led by Gustavo Quinteros, scored 38 points in the table and keep themselves up with 6 points over Independiente and Catolica, both with 32. To boost their eleven crown, millionaires need to be victorious against the Lojanosa and expect that Independiente and Universidad Catolica does not win their games against Deportivo Quito and Deportivo Quevedo, respectively. They could even take the trophy if the reach a tie with the team del Valle.

In yesterday’s game, in the first two minutes, the Argentine Denis Stracqualursi scored the first goal of the match after receiving a precise pass from the left player Enner Valencia, 13 minutes later, Daniel Angulo added the goal of the tie, but after the first time, Stracqualursi scored again assisted by Enner Valencia. At the beginning of the second stage , Angulo returned the tie to two for Independiente .

In other matches, Barcelona won 1-0 to Liga de Quito and approaches to international championships, Deportivo Quito defeated El Nacional, also by 1-0 and entered the qualifying group for international tournaments. On Friday, Manta defeated Universidad Catolica 2-1 and smashed their aspirations to come first, with the option to fight the crown on Saturday, Liga de Loja thrashed 4-1  Macara and sent it to the B series. For its part, Quevedo, struggles for not going down, won 3-1 against Cuenca.