Explosion at a Chilean restaurant leaves at least eight injured 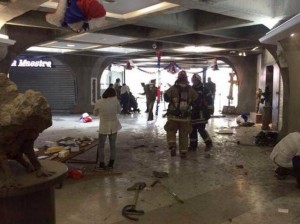 At least eight people were injured after registering the detonation of an explosive device in a fast food restaurant in the Chilean capital, police said this Monday.

The police also reported that various damages to the structure of the shops around the incident were recorded.

“At 14 pm an explosive device was detonated in the sub-center of this subway station and now the expert reports are being made (…) to determine the origin of this artifact,” said Police Colonel Mario Rozas.

The wounded presented various injuries and were taken to various medical centers.

Government spokesman told the media that the authorities are conducting investigations to determine those responsible for the fact they described as “terrorist.”

Banks shall be sanctioned for clients discrimination