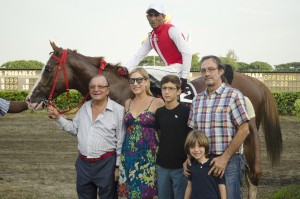 Facheng, the horse of businessman Alvaro Noboa, obtained his third victory in the HARINA LISTA Classic, held on Sunday, April 19 at the Miguel Salem Dibo Hippodrome.

The horse ran through the 1,300 meters of the Samborondón equestrian center in a time of 1 minute 18 seconds and3/5. It counted with the effective leadership of the Ecuadorian jockey José Jurado, beating fierce adversaries as Catito and Polvo de Estrellas (Stardust by is Spanish name), that escorted him to the goal.

Alvaro Noboa, along with his wife Dr. Anabella Azín and his son Santiago, received the trophy at the winner’s circle.