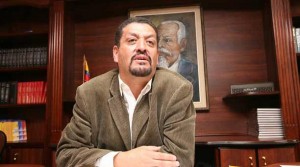 Fausto Camacho yesterday filed a criminal complaint in the Attorney General’s Office requesting the investigation of the work of the Selection Committee and the Council of Citizen Participation and Social Control (Cpccs).

This, because of the partial renewal of the National Electoral Council (CNE), in which Mauricio Tayupanta and Gloria Toapanta were appointed as new principal members.

Camacho said that the complaints of alleged irregularities in the records of the contestants should have been taken into account by the Commission and the Cpccs. Furthermore, he highlighted that there is a formal complaint for forgery against one of the participants.

His lawyer, Jorge Acosta, said that about 100 documents that prove the alleged irregularities were delivered to the Attorney´s office.