Fernando Balda was not released from jail yesterday as planned 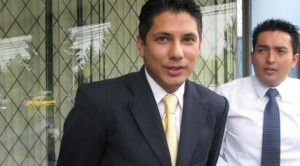 The former assemblyman of the Sociedad Patriótica party, Fernando Balda, was not released yesterday as planned, after a judge declared on Tuesday defunct the penalty of slander for which he was convicted.

The transfer of the release ballot, issued by Judge Fabiola Gallardo, should have been done yesterday but it did not happen.

The ballot should have been sent after Tuesday noon to prison where Balda remains, but it was done at 19:00 of Wednesday,  because the ballot was allegedly disrupted.

Vanessa Castelo, Balda´s wife, said that they waited all day for the ballot to be withdrawn but this did not happen. “We will wait until tomorrow (Thursday) morning, when the ‘ballot man’ arrives”, were her last statements.