FIFA World Cup will be exhibited in Paraguay 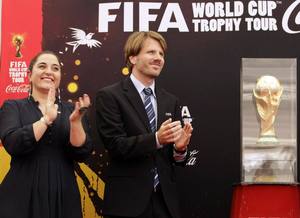 As part of the world tour sponsored by FIFA, the trophy of the World Cup Football Brazil 2014 arrived today to the city of Asuncion in Paraguay, where the headquarters of CONMEBOL is located.

The cup was moved to the Presidential Espigon by the security staff of FIFA and was presented at a ceremony than five minutes long, who led the Spanish Pekka Odriozola representing FIFA.

After, the trophy was led in a vehicle to a luxury hotel near the airport, where tonight the FIFA will organize a closed event.

It is expected that the trophy be exhibited to the public tomorrow at the convention center of the South American Football Confederation (Conmebol), near the airport. The trophy has to Bolivia as its next destination.

Nadal beats Nishikori and pass to the next round