BREAKING NEWS
China agrees to Ecuador overseeing Chinese fishing vessels on the high seas
Hoteliers get ready to receive visits on the beaches
In Mexico, the Guayaquil plan will be applied against COVID-19
Mike Pompeo asks China to control illegal fishing in the Galapagos
Judge orders preventive detention against Dalo Bucaram, his two brothers and others for alleged illicit association
Álvaro Noboa calls for a peaceful protest in social media for the annulment of his movement
Scientific journal from Manabi, among the 100 most cited in Google Scholar Metrics
Existence of the Ecuadorian Forward Party will go to the Electoral Court judges
Suspected fraud towards Álvaro Noboa
Binomial by Álvaro Noboa will be presented on August 9, 2020 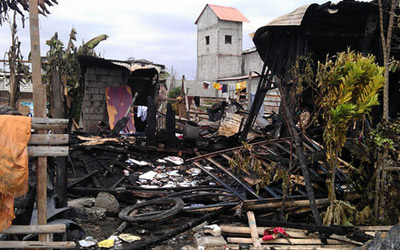 Remains of the burned House

Four children, two of them 3 years old, one of 2 and a 10-month-old baby, died yesterday from a fire that occurred at 23:30 pm in their residence located in Los Vergeles, in the North of the city of Guayaquil.

Several residents of the sector indicated that moments before to start the fire, they heard the passage of a motorcycle, which apparently threw an artifact to the House where the minors were.

The chief of the Fire Brigade of Guayaquil, Carlos Alberto Vallarino, indicated that the causes of the fire are still unknown, and it must be investigated by the Crime Squad of the Police Department.

Prosecutor Víctor Altamirano, who went to the place to make the removals of the bodies, points out that it is not discarded nor affirmed that was an attack in order to not obstruct investigations, because of several versions of the fact.

Later, the police arrested three subjects identified with the alias of Tito, Ronny and Caraballo, who had allegedly threatened the mothers of minors, although it did not specify the reasons.

The Prosecutor’s Office dictated the preventive detention of the suspects.

Barcelona wins in Manta and Emelec awaits for Catolica