The National Electoral Council indicates that 600,000 people have stopped voting 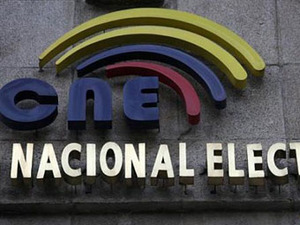 On October 11, after closing the national voter registration, the National Electoral Council (CNE, for its acronym in spanish) estimated that around 600,000 people make up the passive standard. (those who repeatedly do not vote).

The CNE said that ran a voter registration debugged and divided it into “passive” (those who have not cast ballots in the elections of 2009, 2011 and 2013, although voting is compulsory for those over 18 years) and “active “(which includes those who themselves have had compulsory voting, including youth of 16 years, the police and the military).

According to the CNE, the purpose of the elaboration of this passive registration aims to better understand the causes of absenteeism that on last February were 2’208.379 voters, i.e., from 18.9 per cent, wich means the 18,9%.

To decrease this rate of absenteeism, the CNE plans to carry out a campaign of socialization that will have a budget of $33.000 which will be used to organize workshops, surveys, and a publication of the passive registry information.

The technician Department of voter registration, Wilson Hinojoza, indicated that the CNE will prepare a database of those who did not vote, in order to purge the log after the elections.