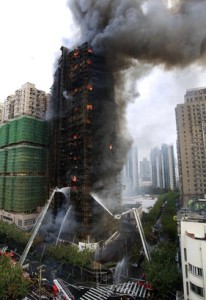 In the downtown of Metropolitan Shangai, 42 people have died so far due to a fire on a residential building of 28 floors. The structure was being restored according to a communication made by the China news.

Previously only eight victims were known. Authorities reported that the flames started sometime on Monday morning. The structure is located in the intersection of Jiaozhou Road on the district of Jing’an Yuyao.

Over 80 fire department trucks have mobilized to stop the blazing building. It took more than four hours to the firemen to extinguish the fire. Around 90 people were attended in the nearby hospitals.

The building contains 156 families, but many of them moved to shelters for the duration of the renovation. Sadly most of the victims were jumpers who in desperation leaped from windows.