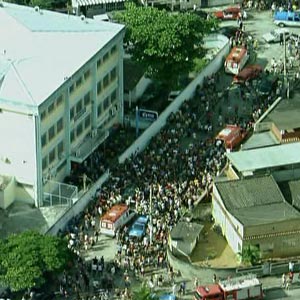 A former student of the school Tasso da Silveira, in the west suburb of Rio de Janeiro known as Realengo, opened fired inside the academy killing 13 people, 22 were seriously injured, and afterwards the crazy committed suicide. Coronel Evandro Bezerra, spokesman of the fire department revealed the number of victims after the altercation.

The school Tasso da Silveira is an academy that teaches students of nine to fourteen years, until they go to attend highschool. The crazed former student was identified as Wellington Menezes de Oliveira, of 24 years old. According to the mayor of Realengo, Wellington killed himself after fighting with the police. To gain access to the school Wellington arrived well dressed and carrying a bag, the crazy told he had a conference to give to some students. Finally he reached the third floor of the academy were he started shooting everyone that moved.

According the coronel Djalma Beltrame, of the military police, informed that an officer who reached the scene wounded the crazy. Afterwards Wellington shot himself in the head. The disturbed youth left a letter in which he explained that his objective was to kill himself once he fulfilled his objective. According to Beltrame, the crazy had plenty of ammunition and carried to firearms.

The slaughter occurred during the entrance hours of the students, his letter depicted incoherent messages of someone with low self-esteem.