From today three hundred agents will gradually withdrawn of Guayaquil 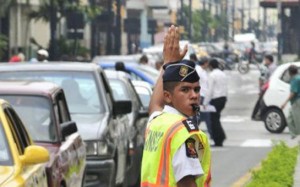 The Minister of Transport, Paola Carvajal, said today that 300 agents from the Transit Commission of Ecuador (CTE for its Spanish acronym) would begin their transfer to the guard of state roads.

Carvajal said that these traffic agents will be on the roads of Daule, Nobol, Duran, Milagro, Samborondón and Playas in Guayas. This measure will gradually run until Sunday, February 22, 2015.

Through a letter addressed to Carvajal, the representative of the Municipal Transit Authority, Andres Roche, said: “the response and the consequences of what might happen by the arbitrary withdrawal of 300 agents of Guayaquil, are her responsibility (Minister of Transport).”

According to information from the Ministry of Transport and Public Works (MTOP for its Spanish acronym), all agents of the CTE will be withdrawn in August from Guayaquil, so the civil agents from the Municipalty take office.

For this, the Municipality will initiate on February 26 the training of 650 aspiring civilian agents, inspectors and transit supervisors at the Espiritu Santo University (UEES).