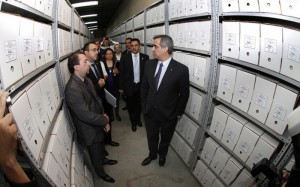 About 100 million folios are part of the general archives of the Judiciary Function, located in the north of Quito. The site was conditioned to preserve the judicial historical memory of the country and 1’209.480 records are kept there.

There are documents dating from 1700 to 2014, such as Criminal, Civil, Labor, Transit and Women Commissariat cases. Similarly, there are records of the Administrative Courts, District Attorney and the Provincial Court.

Sonia Merizalde is part of the 10 experts who are responsible for the care and recovery of judgments, proceedings and awards. That is the fundamental task of the new general archive.

Prime Minister Gustavo Jalkh toured the facility on February 18 and received information on the procedure for preserving information.

The investment in the archive is around $ 400,000, said Andrés Segovia, Secretary of the Judiciary.

The ultimate goal is to scan the documents. Consulting a record will no longer take days. The requirements will be met in less than 15 minutes, he offered.