Gaza keeps ceasefire and negotiations between Israel and Hamas are retaken 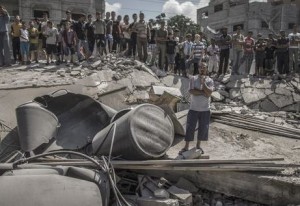 The ceasefire of 72 hours that began on Sunday night has been respected by both Israel and Hamas Palestinian militias, and the calm has been witnessed on the border of the Gaza Strip.

A truce that start again talks in Cairo for a permanent ceasefire.

The Israeli delegation and the Palestinian delegation again meet yesterday in the negotiations table with Egyptian mediators in the presence of members of the UN and the Arab League.

During the meeting in Cairo, confirmed by the official news agency MENA, both sides will submit their respective claims.

For Palestinians, one of the main claims passes through the end of the blockade on Gaza, imposed by Israel after Hamas came to power in 2007.