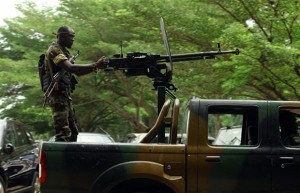 Forces loyal to Ivory Cost presidential claimant, Alassane Ouattara, launched a serious offensive against the bunker where Laurent Gbagbo is holed up. The attack was repelled according to the report of a Western military source. The hostilities will continue until Laurent Gbagbo finally accepts and cede power after losing the November election to Ouattara.

The unidentified source that lives near Gbagbo’s heavily fortified residence in Abidjan, stated that the hostilities ended during the afternoon while Ouattara forces regrouped. Youth militias along with the presidential guard protect Gbagbo’s residence. Meanwhile, Alfred Kouassi, residential neighbor told Reuters that there were several loud explosions followed by automatic gunfire and the heavy impacts of artillery. Kouassi stated that several cars were speeding in different directions, and a couple of French tanks were in the streets, but did not participated in the attack.

Alain Juppe, the French Foreign Minister stated that the negotiations with the entourage of Laurent Gbagbo and Ivorian authorities failed because of Gbagbo’s intransigence. Gbagbo remains defiant and refuses to recognize Ouattara’s victory on last November.

While desperate civilians ventured outside their homes to scavenge food and water. Several people claimed that hey have not slept or eat, and they don’t have anything to drink either.