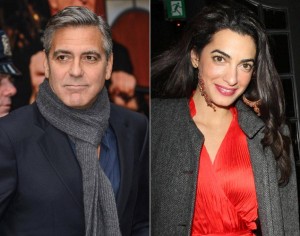 George Clooney is one of the most eligible bachelors in Hollywood

According to U.S. media, the Hollywood heartthrob, George Clooney (52), would have engaged to British lawyer Amal Alamuddin (36). The couple was seen at the restaurant Nobu in Malibu, California, while dining in company of model Cindy Crawford and her husband, Rande Gerber. Alamuddin wore an engagement ring, according to People magazine.

Amal Alamuddin, born in Beirut, is a specialist in international law and human rights who studied in London and New York. She was responsible for the defense of Julian Assange, founder of Wikileaks, and has also worked on several projects with the United Nations.

Clooney, who was married for four years with Talia Balsam, and divorced in 1993, is known to be reluctant to marriage and of dating several models and entertainment personalities. The couple has been dating since October last year.