Government qualifies the mobilization of workers as a political act 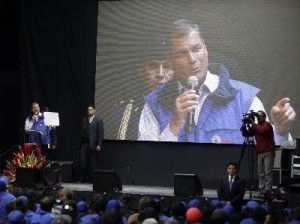 For President Rafael Correa and the Executive Secretary of Alianza PAIS (AP), Doris Soliz, the demonstrations convened by the union leadership are political and not an act of claim.

Correa took advantage of his speech for the International Day of the Recycler, to express his rejection. What they want, he said, “is try to return to the past, when the abuses of certain association class were above the common good.”

Correa insisted that the government works for the poor and excluded sectors. Not to please the “pseudo-leaders that perpetuated privileges, who even imposed abuses to maintain their power (and who), today march against the most revolutionary government since the Alfarista revolution.”

Soliz believes, for her part, that the mobilization tries to disguise as a social protest, what is actually a political opposition. “This government belongs to theworkers, the one that debates the most,” she said. And also criticized “the old union leadership that has made a modus vivendi without really connecting with the bases.”