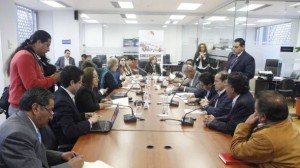 During the session of March 18, the Chairwoman of the Commission on the Rights of Workers, Betty Carrillo (AP), informed she requested to the Presidency of the Assembly an extension of the 45 days term given by the legislative provision to deliver the report for second debate of the Labor Justice and Social Security bill.

According to Fausto Cayambe (AP), member of the board, the report would be ready next week in order to be approved by the plenary.

Cristina Reyes (PSC-MG), a member of the Commission, said that the main reasons why the ruling party has postponed the approval of the report are the social pressure and the public demonstrations that will be held today in several cities.

The Commission received on March 18 the Battle of Tarqui Association, whose president, Gabriel Riera, said that not keeping the 40% in the provision would leave open the possibility to reduce or even remove the state contribution to retirement pensions.