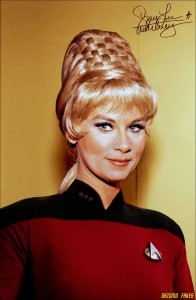 Grace Lee Whitney, the actress who played the role of Captain Kirk´s interstellar assistant in the mythical ’60s series “Star Trek” died Friday at her home in Coarsegold, California, at age 85. The causes of her death were natural. Her son Jonathan Dweck announced the news.

Whitney gave life to the character of Yeoman Janice Rand during the first eight episodes. After the show, her acting career ended when falling into alcohol addiction, as she documents in her autobiography “The Longest Trek: My Tour of the Galaxy.” It was only with the help of Leonard Nimoy, actor who played Spock in the series, that the actress could return to the world of Star Trek, this time in the films of the franchise.

During the last years of her life, Whitney dedicated to help people with addiction problems.