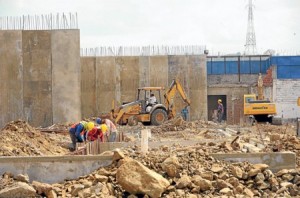 The demolished area, where once operated the old blocks of the Prison has now 6 new halls, which later this year will be 10 and in the first months of 2015,12, informed the Minister of Justice Ledy Zúñiga.

The remodelling of the jail will allow the stay of 4,800 prisoners, as in the Social Rehabilitation Center Regional Guayas Number 8, which means the increase of 5 times the capacity in the province.

Minister Zúñiga explained that the building was completely demolished, since the sanitary and electrical system were useless, that job ended and they are now focused on the rise of the new blocks.

Each building has space for 400 prisoners and has the necessary conditions to obey the new management model within a worthy living space, said Zúñiga.

The new facilities will feature a new service called Commissary. This is a pantry where prisoners can get grocery and personal care products, whose value will be subtracted from the savings their families deposit for them. The maximum monthly allowance for each person is $ 40.

Companies that will manufacture pots for induction cookers were already selected