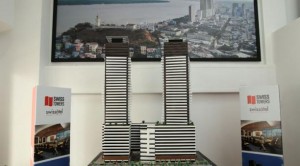 At the end of 2017 will be ready the first stage of the hotel and apartments complex Swiss Towers. The hotel project will have two towers of similar architectural features, which along with the rest of the building will be the highest in the city of Guayaquil, 190 meters.

The first phase corresponds to the tower where will be located the hotel, with 300 rooms, 120 apartments and 1,040 parking lots. While the second stage, which will be ready ten months later, will have 30 floors for offices, which will have between 100 and 700 square meters.

The investment cost, funded by the hotel chain Swissôtel and the HOV Hotel company of Quito SA is $ 120 million.

The construction in its scheme phase will begin in the coming weeks, on the streets Malecon Simon Bolivar and Luzárraga (downtown).

“This will be the third Swissôtel in South America. The first was made in Quito in 1990, and four years later the Lima (Peru) was built; and now in Guayaquil”, said Luis Villacrés Smith, chairman of Swissôtel.

Cordicom launched campaign “Now my voice is heard” in Guayaquil