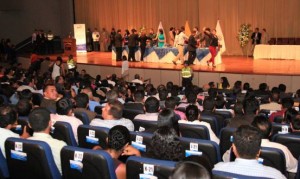 33 elected authorities in the province of Guayas received yesterday by the National Electoral Council (CNE), the document that certified them the elections winners of February 23, March 31 and April 13. The event took place at the `Eloy Alfaro´ Civic Center of Guayaquil  at 16:00.

Accreditation were given to the Prefect, Viceprefect, Mayors, urban and rural Councilors ; and Parish Members of Guayas.

The CNE President Domingo Paredes reminded to the sectionals authorities their  new obligation “to serve and not be served by decentralized governments.”

In the first moments of the ceremony, Piedra dedicated a minute of silence to the memory of Walquer Vera, who was killed last Sunday.

Jaime Nebot, Guayaquil reelected Mayor, did not attend the ceremony. The same manner did the elected councilors of this town, from the political movement `Madera de Guerrero,´ who were not present.

The elected Mayor of Duran Alexandra Arce spoke on behalf of the mayors of the province and called them to commit to the labor that the people gave them . Meanwhile, Gustavo Navarro, member of Alianza PAÍS (AP) , representing urban and rural Councilors of Guayas, said that the authorities will have to provide `strongly´ in the inspection of autonomous government processes .

Military officers guard the Canton Muisne after the murder of Vera