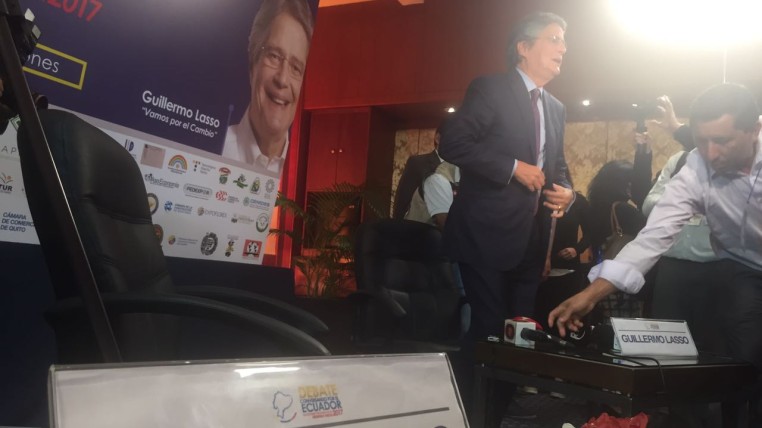 Moderator Andrea Bernal presented the Presidential Debate Talking for Ecuador 2017 at 20:30 on Monday, March 27, 2017. She immediately welcomed the candidate Guillermo Lasso (Creo-SUMA) to the set installed in one of the halls of the Hilton Colon Hotel, in Guayaquil.
At 20:32 Bernal announced that until that time an answer from the candidate of Alianza País (AP) had been expected. The meeting was organized by the Chamber of Commerce of Guayaquil and 128 social organizations in the country. Lasso lamented the absence of the government´s party and said that “it is a snub to the Ecuadorians who are reflecting their vote.” Also, the voters expected to hear the proposals of both candidates.

Lasso said he has not refused to attend any debate or dialogue and recalled that he had accepted the proposal of the Teachers’ Network in Quito. The president  hopeful of the Creo-SUMA party said that the fact that Moreno has not accepted to hold any debate “shows that he is not qualified to govern.” At 20:40 Bernal announced that the debate would not be held in the absence of one of the applicants and closed the program.