Half a ton of cocaine seized in Santa Elena 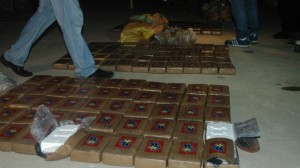 More than half a ton of drugs seized, four people detained, a vehicle and a boat seized. That was the result of an intensive operation that agents of the Narcotics Investigations Unit (Uian) conducted between Friday night and early yesterday morning in the Capaes sector, in the province of Santa Elena.

The incident occurred inside a two-story house located in the “Ruta del Spondylus,” near the beach and with direct access to the sea. Uian agents surprised the suspects at the instant they were loading 10 jute bags containing between 50 and 60 bricks of cocaine on a boat. “Taking advantage of the high tide, the ‘Niño Edison’ boat ran aground in the yard of the property to load the alkaloid. When the suspects were preparing to turn on the outboard motor,” the officers arrived. (I)

Alleged perpetrators of the death of two Argentine tourists are detained