Hearing is reinstalled by Cofiec case 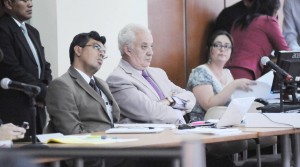 The decision to be taken on the four former members of the board of the Cofiec bank, entity that allegedly illegally granted the credit of $ 800,000 to Argentine businessman Gaston Duzac, is held by the Criminal Division of the National Court of Justice (CNJ for its Spanish acronym).

Yesterday, the hearing was reinstated to treat the applications for annulment and appeal to the call for trial and the acquittals by Judge Paul Iniguez.

The Court ruled to accept the request of the Attorney General, Galo Chiriboga, for the annulment denial raised by many of the defendants.

According to researchs performed by the prosecution, said Chiriboga, four former members of the board authorized the delivery of the loan to Duzac despite having knowledge that it did not meet the legal requirements.

It is envisaged that the case hearing is reinstated today to decide on the appeal.