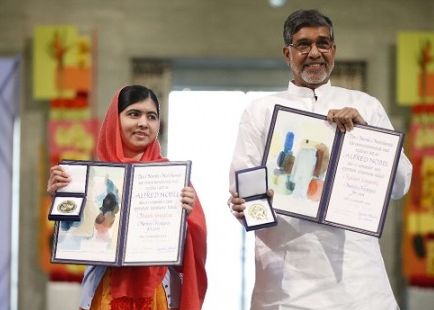 The Pakistani teenager Malala Yousafzai and the President of the Global March Against Child Labour, the Indian Kailash Satyarthi, were awarded on Wednesday the Nobel Peace Prize at the Oslo City Hall, for their struggle for the rights of children.

“A young woman and an older man, a Pakistani and an Indian, a Muslim and a Hindu, both symbols of what this world needs: more unity, fraternity between nations,” said the Chairman of the Nobel committee, Thorbjoern Jagland, prior to the delivery of the prizes.

Malala, who was shot in 2012 by Taliban fundamentalists for defending women’s education in her country, has become “chief spokeswoman” of the struggle for the rights of girls to education, and currently lives in Birmingham, central England.

Since her departure from Pakistan, she has participated in several international conferences where she advocated for peace and education of children, calling on world leaders to “send books, not weapons” to poor countries.

Satyarthi, 60, whom the committee has compared to Mahatma Gandhi, has led peaceful protests against child exploitation and contributed to the development of international conventions on the rights of children.