Homeless Man with a Golden Voice 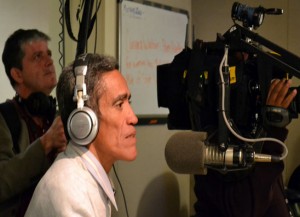 Ted Williams used to be radio broadcaster; however his life and career was destroyed by vices and ended up as a homeless man. However the Columbus Dispatch posted a clip of him demonstrating his voiceover skills while begging by the side of the road, and his life changed again.

On Thursday, Williams lived in a tent near the highway in Columbus, Ohio, however on the past days he went to New York for a reunion with her 90-year-old mother. The media covered the emotional event; afterwards he made some commercial voiceover work. Williams was offered a job by the NBA’s Cleveland Cavaliers, and is also in talks with NFL Films for some possible work.

Soon the life of Ted Williams became a compelling tale and an online sensation after the Columbus Dispatch uploaded a clip of him. He revealed that he had found a new sense of spirituality in 2010 that would allow him to deal with whatever shows up. Even after the Cavaliers became aware of Williams criminal past their 2-year-contract offer still stands

Tad Carper, spokesman of the Cavaliers said that as part of their plan is to help Williams with housing and that they are still working on that. Williams flew to New York to visit Julia, her mother, because she was always there for him while he battled his addiction.

Williams life and career began to dwindle in 1996 when he began consuming marijuana and cocaine and even after the help of all of his nine children, he ended up living in the streets of Columbus. Now he has been sober for two years and asks that they still pray for him.